On Friday morning, a former high-school classmate and Facebook friend shared a photo from ABC 7 Chicago’s page. It was an H&M ad, that featured a size 12 model wearing a bikini. 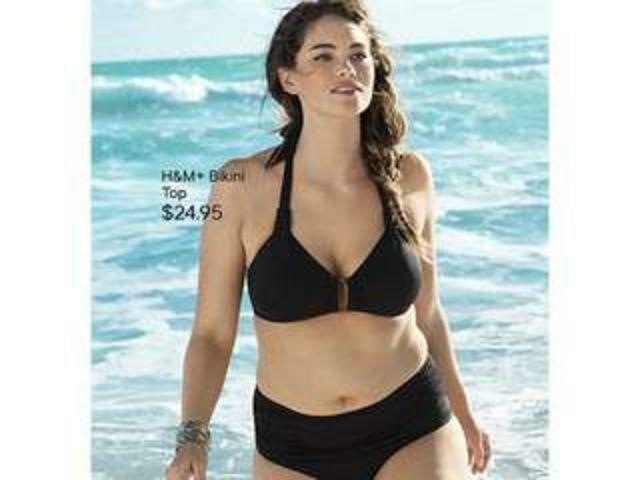 “The average size of American women is 12-14. Now clothing retailer H&M is making waves with their recent swimsuit ads featuring a plus-sized model.”

Twenty six thousand comments. It was the comments section of this photograph that inspired this post, actually, because they were both utterly predictable and enraging:

Those hastily cropped images are just a taste of the colorful and judgemental commentary. Some weren’t totally atrocious. Some were so abhorrent that I decided to name-and-shame, however “low” that may be considered here on the blogosphere. Listen up, people: if you have the kajones to make disgusting comments like that, you better have the kajones to back it up. So in the case of those assholes: let whatever happens, happen.
I was already prepared when I perused the thousands of opinions attached to the image. In scenarios like this, you predictably get three things: faux-concern for the “fat” person’s health, “gross, you are promoting obesity!”, or some form of “skeletal stick-bugs”, “disgusting anorexic models”, “only dogs want bones!”, “real women have curves”. And there you have it, folks:
“Real women have curves.”
The phrase “Real women have curves” is up there on the list of Top 5 Things I Hate, along with black licorice, unsweetened coffee, religious bigots, and floral-printed denim. I could probably rattle off fifteen reasons why I despise it, first and foremost being that it is utterly offensive to my hordes of robotic female friends. Because, you know, those exist.

The word “real” is defined as adjective: actually existing as a thing or occurring as fact; not imagined or supposed. So, the very idea of a type of woman who is somehow less than real is not only ridiculous, it is physically impossible. If she is constructed of atoms, a woman is a woman, whether biologically by birth or otherwise. A fat woman is a real woman. A thin woman is a real woman. A woman with curves is real, as are women without. Athletic women are real women. Trans* women are real women. With these points outlined, I want you to say it with me: All women are real women.
I understand where the “real women” nonsense came from. Really, I do. It was developed years ago as a confidence booster for the larger market, where none existed before. After the word “curvy” became hideously misused as a euphemism for “plus sized”, the “Real Women Have Curves” agenda stepped up as a way to empower plus-sized girls. Except…all it managed to do was pit woman-against-woman. Suddenly, the big girls were hating on the slim girls, and vice versa. And quite frankly, I don’t see how bashing another group of people is up-lifting.
After “Real Women Have Curves” came other phrases that are outright ridiculous. “Men don’t want skin and bones!” is another one that makes me itchy, because not only is it hateful towards slimmer ladies, it is highly misogynistic. Because let me tell you something:I don’t give a flying fart in space what men want, and neither should any woman. My own lesbianism aside, I think it is vital that women realize that they need to please themselves first and foremost. And another heads up, girls: referring to slim ladies as “anorexic stick bugs” or insinuating that thinness is associated with drug addiction is just as bad as people assuming that all large people are large because of an inability to control themselves around a Big Mac.

The point is, ladies and germs, people need to stop being so fucking judgmental of one another. Slamming a group of people to make yourself feel better is childish. If you are truly comfortable in your own skin, it won’t matter whether someone else has something that you don’t. Stop making assumptions about one another based on appearances alone. Stop falling into that hateful woman-versus-woman trap.

Repeat it until you believe it: ALL WOMEN ARE REAL WOMEN.

And I almost forgot: I have a special shout-out for that “cardiologist” up there in the comments section! If you’re the Andrew Rudin: Cardiologist that I did a quick Google Search on, you need to sit the fuck down and shut your mouth. Because your comment leads me to believe that you have NO IDEA about the Body Mass Index, body proportions, and weight distribution. Someone who is 160lbs, 6 feet tall, and a size twelve is going to have a totally different shape then someone who is 5′ feet tall and the same size. I would also recommend that you pay your child support on time, so that you don’t get your medical license suspended again. Fucker.