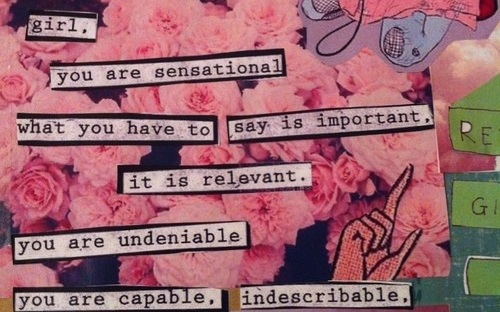 I recently ranted quite a bit about the concept of “Real Women”. It quickly became one of my most-viewed posts, and after it hit the fan, it got me to thinking.
You see, if you’ve been following my blog, you’ll know that I’m a lesbian. A member of the LGBT community, if you will. And within that “LGBT” there is still one group that gets judged, excluded, and generally shit on by the rest of them. (I won’t say “us”, because I don’t tolerate that kind of nonsense, so I obviously don’t take part in it.) Despite all the harsh judgement and inequalities that we face from the Far-Righties and Religious Extremists every single day, there are members of the community that think it’s cool to exclude others simply because they are “different”. I’m talking, of course, about the “T” in that LGBT sandwich. The transgendered community is constantly hassled. Backs are regularly turned on them, because they don’t fit some imaginary standard that we have placed upon ourselves. Even civil right’s organizations like the HRC have ousted them, which is about twenty different kinds of fucked up.

While writing my “Real Women” rage, I made sure to include transgendered women, because it’s the damn truth. Women that are born transgendered are just as real as you and I. But you see, some people disagree with me. (Probably the same assholes who think “real women have curves” and “only dogs like bones”.) These people say that transgendered women aren’t “real women” because they aren’t born into the bodies that match up with their gender identity. I actually overheard someone say that “A woman can’t really be a woman if she’s born with a penis.”
To that guy, and all the others like him, I say: fuck you.

Seriously. Fuck you, dude, because you are a bag of douche. No, you are multiple bags of douche. Making judgmental blanket statements about people that you know literally NOTHING about reserves you a special spot in the 7th Circle Of Hell.
So, you’re wondering how I reacted to hearing this? Well, as you can see, first I got mad. (A special thanks to my wonderful Italian temper, and my sassy aunt.)

After I was done spitting fire and blowing smoke out of my ears, I reached out to these women. Because even though they don’t have a damn thing to prove to jerks like that, they deserve a voice. So, I posted a question on Reddit.com, and a few lovely ladies over there were willing to give some answers to my question:

“What body image issues do you struggle with?”

That’s right, folks, transgendered women suffer from the same damn body image issues that cisgendered women suffer from. Shock. Awe. No shit. And do you know why that is? Because, despite their obvious struggles to overcome, they are no different then the rest of us. Regardless of the bodies that they were born into, these women still wake up in the morning and pick out what to wear. They still have bad hair days. They still have low-self esteem days, and days that they feel like a million bucks. They are women, just like the rest of us, and they are the group of women who could arguably be hurt the most by all that “Real Women” rubbish.

I will repeat it until I’m blue in the face: all women are real women.

I won’t admit to being an expert on the transgendered community. I don’t know the etiquette and I don’t know all of the terminology, but the fact of the matter is, I hold women’s issues very dear to my heart. Inclusivity makes the world go ’round, and I’ve had it up to HERE with one group or another being excluded because they don’t exhibit enough of this or that. And if I didn’t work hard to make sure that all women and their issues are included in my fight, then I’d be doing a half-assed job of it, wouldn’t I?

4 thoughts on “Expanding On “Real””